So, now we’ve got to move swiftly!

I see you’re willing and able, You have your faded work- jeans on and you can borrow my older safety helmet. It’s a bit squeaky, but perfectly functional. We have two hours to paint Salty Pete between squares 1 and 19. See the ‘Lucky Bag’ diagram, below .

During the last hour before you arrived, I’ve been stirring this huge pot of white emulsion paint – essentially, bringing it back to life from ten years ago. I’m as surprised as you are that it worked… and it’s free, of course. If we use it up – which is unlikely – there’s another, identical tub sitting in the darkness close to where the rat was last seen…

‘Roddy’ – Salty Pete’s newly-named resident rat – has not been seen since our fateful meeting in the dark and dingy recess under the old vice. I have to say, we must have been feeding him well because his coat and eyes gleamed with health. I’m not entirely happy with his (or her?) presence. How do you ‘sex’ a rat? Very carefully, I imagine, especially a wild one, living in your future man-cave.

I decant the first measure of thick, white paint into two old mugs and hand you a medium sized brush. We set to… The brief is to paint everything above waist level that is wood and connected to the old stone – with the exception of the now-completed garden tools racks, made from the old pallets. The contrast of aged wood and white will look good.

I’m after a cheap effect; what Bernie and I once named ‘North California Shabby Chic’. In the 1990s we spent many weekends motoring along the Pacific Coast Highway (also known as PCH and Highway 1) and further north, following the roads as far as the stunning Oregon coast. The computer-based world we worked in was centred on technology from one of the Silicon Valley companies, and we took every opportunity to tag a few days’ adventure onto each of our quarterly business trips.

North of San Francisco, it’s quite sparsely populated. You can drive for hours before finding that much-desired cafe, tucked away down a backroad. When you do, there’s a good chance that the decor will be ‘North California Shabby Chic’. This consists of rapidly-applied rough strokes of thick, white emulsion, resulting in a rich coat of white, underpinned by occasional glimpses of the wood beneath. It doesn’t come into its own until you put colourful things on it, of course…

It’s easy, error-proof and fast. It doesn’t matter what else you paint in the process because it can all go in the mix. We’re talking casual painting – a style to go with the organic nature of our restoration of Salty Pete… It’s also fun, and we’ll end up spattered with white. But your old jeans and my old jeans have seen it all before.

Music… we’ll need music. So here is one of my favourite Jackson Browne tracks to keep us rhythmic and motivated.

Two hours later, singing and, occasionally, giggling, we have finished. Our arms ache with the constant brush strokes, and we’re a bit of a mess… But it’s been fun. Salty Pete – at least the wall between squares 1 and 19 – has been completely transformed.

One of the long sections of pegboard still has shelf supports fixed in place. They’re drilled into a batten that’s is fixed into the stone at the back, so they’re very solid. Not waiting for the paint to dry, I reach for the step ladders and try them for size. They hang, perfectly, leaving ample space, below, for other fittings to be attached. Doing this gives me an idea about the many bicycles…. but more on this, later.

“Suddenly, it’s bright!’ says Bernie, arriving with three mugs of steaming tea – we’ll have to be careful not to confuse the various mugs, going forward…

She examines what we’ve done… “North California Shabby Chic!” She says it with a chuckle. It’s all the approbation we could wish… The day has begun well, and it’s about to get better.

There’s one shelf I’m in a hurry to see dry. It’s right in the middle of the main section and I want it to be the home of a bluetooth-based portable speaker to which I can ‘beam’ music while we’re working in here. Having quality sound is a key step. I place an old tile beneath the speaker to protect it from the drying paint, and connect it up to the phone. The well-constructed cabinet space – a survivor from one of Peter’s radio shacks – makes its sound rich and resonant.

Above it are two more shelves. I put the large, outdoor extension leads into these, and the whole arrangement seems to snap into life. Directly above this are the twin feeds from the dual power sockets on the main beam, so we’ve aligned form with function.

Let’s bring it to life… Here’s an appropriate song from John Miles:

USOs… it’s not a typo. Unidentified Structural Objects… There are two of them; the smaller one, here, Square 11 – beneath the music and power shelf, and a bigger floor to ceiling one on the back wall, Square 19.

The smaller one, beneath the music shelf, is about the depth and height of a kitchen unit, which is why we placed a broken and surplus kitchen unit next to it, years ago. We had a vague plan to make it useful in the future and it currently houses chisels and an old jigsaw. The USO is made of pale brick and serves no visible purpose. Perhaps it supported something vital in Peter’s day?

Whatever it was, it’s about to become something new, for I can’t make progress along this most important of walls without resolving its use. It is too big and intrusive to ignore, and I’d just fall over if it stayed unchanged. So I have to make it part of something functional.

Thinking furiously, I assemble some bits… which turn out to be an inspired collection…

There’s a Black and Decker ‘workmate workbox’, a plastic tray, a pen and pencil drawer insert, two pieces of MDF – one raw, the other covered, a scrap halogen light fitting from my old office desk, and, finally, a small ‘modeller’s’ vice.

I push the old (and door-less) kitchen unit up snug to the USO. A short stride to the newly commissioned Drill Cabinet sees me equipped with two ready-charged drills – pilot drill and power screwdriver locked and loaded. Five minutes later, I’ve drilled the two pieces of MDF into place. In the process, the kitchen unit has been secured into the whole. I’m looking smug…

By some miracle of good fortune the white plastic tray fits snugly behind the MDF, tidying the gap to the wall. I place the pencil tray into its white brother and rotate the ‘workmate workbox’ into one of two orientations it will have, long-term.

Things are looking good. But this workplace will be used for detailed things, and I need the footless halogen light resolving…

The small vice comes into play: it fixes (at a right-angle to the usual orientation) to the music shelf, above. The arm of the broken halogen lamp is fastened, horizontally, so that the head can be rotated to the workbench, below, or just about anywhere else for contributory illumination.

Our working day is ending. I have one final thing to do. We have a plethora of old, plastic, petrol cans, and I suspect they’ll make useful storage – sawn in half. The first one is in the above photo, mounted on the pegboard. We’ll look at what it does, in the next post.

The left wall is looking purposeful. But behind me the central part of the floor is still chaotic. I will need a bold move for the next step, if I am not to continue to spend the start and end of each day carrying things out to the lawn and back again.

I stare up into the dusty heavens and wonder… dare we?

Other parts of the Locked Down and Armed series:

18 Replies to “Locked-down and Armed: one man’s struggle with entropy (6) – White Space and USOs” 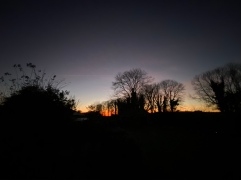 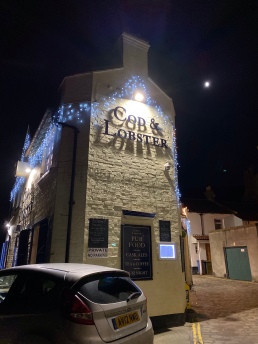 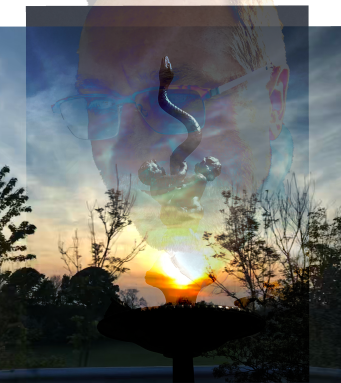 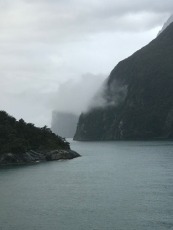 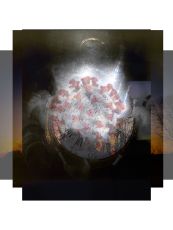 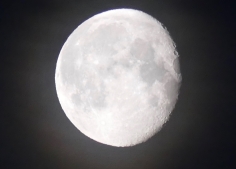 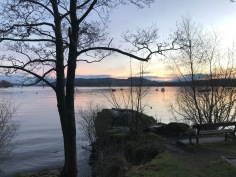 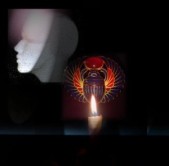