A Woman of Power and Substance

It is the winter of 1584. The well-dressed woman watches as her fourth husband storms out of the dining hall at their present home, Tutbury Castle, in Staffordshire.

In the corner of the room sits a younger woman, now smiling at the angry departure of the man of the house–the sixth Earl of Shrewsbury. The seated woman with the secretive smile has good reason to be pleased at the turn of events. She has been a captive in this house for nearly fifteen years and used that time to create mayhem with sexual politics. Her name is Mary, better known as Mary, Queen of Scots. Her fortunes are diminishing by the month.. But that hasn’t stopped her using human emotions, particularly jealously, to drive a deadly wedge between the Count and Countess, her gaolers.

The lady of the house is already one of England’s richest women, in fact she will shortly be second only in wealth to the Sovereign – Queen Elizabeth I. She already owns the Chatsworth House estate; fabled, even then, for its beauty and gardens. She hates the partial ruin that is Tutbury Castle, but, for that fifteen year period, has done her duty by her husband and her Queen in keeping watch over the exiled Scottish monarch, who is a prisoner in their castle. In this way, and, astutely, at the expense of the Shrewsburys, Queen Elizabeth has kept her biggest problem at arm’s length.

The tall woman staring at the slammed door through which, metaphorically, her beloved husband has passed for the last time, is the Countess of Shrewsbury. She has inherited the goodwill and wealth of three of her previous spouses. She has over ten children from those marriages; some of whom will end up with a future, though distant, ‘claim’ to the throne.

She has led an interesting life, to say the least. On this angry morning, engineered by the jealousy deliberately created by the royal prisoner, Bess of Hardwick, as she is better known, vows that, within the year, she will return to her beloved Chatsworth and pick up the threads of her old life, again…

Earl and Countess Shrewsbury have had to keep moving around the many houses owned by the Earl, as Mary’s life is constantly being manipulated by those who would use her as a figurehead to overturn the fledgling Protestant religion, instigated by Queen Elizabeth’s father, Henry VIII.

Born in 1527, Bess was the fourth daughter in a family of four girls and one boy. Their father died when she was young, but he managed to leave a Will which included a small dowry for the four girls.

Young Bess, aged twelve years, entered service for a great Derbyshire family, Sir John and Lady Zouche, (after whom the town of Ashby de la Zouche is named) whose home was Codnor Castle, in Derbyshire. Codnor was first mentioned in the Doomsday Book of 1086 and was at that time the property of William Peveril of Castleton, in the High Peak.

It must have been a wrench when the employing family moved her from her beloved Derbyshire to London, where she married her first husband (also in service), Robert Barlow, nursing him back to health after being ill with chronic distemper. Robert was weakened and died soon after their they were married. Despite being only seventeen, Bess was eventually granted a widow’s pension, which was one third of his income; but she had to fight though the courts to secure this – an example of her determination to better herself and her standing in society. 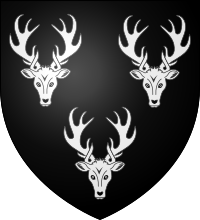 Above – Arms of the Cavendish Family (Source: Wikipedia: CC Public Domain)
Sir William Cavendish had been married twice before and was the father of two daughters. He courted Bess, who was at this time a beautiful and talented young woman, and married her in 1547. Despite his being more than twice her age, they were very happy and had a further eight children.
Sir William had made his fortune as an official of the Court of Augmentations – responsible for the dissolution of the monasteries and the appropriation of the properties. He was able to select from these some very attractive residences for himself. It is recorded that, even at this early stage, Bess had a talent for managing and trading property, and Sir William was persuaded by her to sell his lands in the south of England and buy the Chatsworth estates in her native Derbyshire…
Bess of Hardwick had come home.
Bess’s husband was less talented in business, He died in 1557, having squandered much of the Cavendish estate. Bess managed to claim the sum of the estate and retained Chatsworth, but was heavily in debt and faced a bleak future. Bess was a shrewd business woman, and set to, increasing her assets with business interests including mines and glass making workshops in her home county. 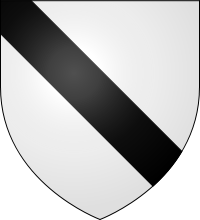 In 1559, Bess married Sir William St Loe, who was Captain of the  Guard to Queen Elizabeth I. He was a very wealthy man, with large estates in the West Country.
He died, under suspicious circumstances, in 1564. Bess was not implicated, but there had been bad blood between Sir William and his brother, on whom suspicion fell. Bess was just thirty-seven when she inherited the full estate, paid off her former husband’s debts, and became one of the wealthiest women in England.
Sir William had been close to the Queen, and this had enabled Bess to be presented at Court. Following Sir William’s death, Bess became a Lady of the Bedchamber, with daily access to the Queen, who looked upon her kindly, respecting what she, another ‘feeble’ woman, had made of herself…
Bess had retained her good looks and health and was pursued by a number of important men. 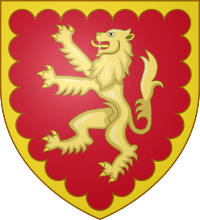 Despite being courted by several prominent suitors, Bess did not remarry until 1568, when she was betrothed to George Talbot, Sixth Earl of Shrewbury, and one of the senior figures in Elizabeth’s hierarchy. Bess became Countess of Shrewsbury. It was into this marriage–a happy one in the beginning–that the disruptive presence of Mary Queen of Scots was to intrude, though Bess and Mary were friends for a long time before the marriage eventually crumbled.

George Talbot was in poor health and died in 1590. Queen Elizabeth was fond of the couple and had made several attempts to reconcile them, but the ‘Mary’ years had taken their toll. Perhaps Elizabeth felt some guilt over this; but, if she did, it did not prevent her from imprisoning Bess in the Tower on two occasions when the Queen felt this other powerful woman was advancing her own cause at the expense of the Crown’s.

At sixty-three, Bess was now Dowager Countess of Shrewsbury and would not marry again. She devoted the remainder of her life to the welfare of her many children, getting into trouble several times because of their distant claims to the throne.

Bess of Hardwick died on 13 February 1608, aged 81. She outlived Queen Elizabeth by five years. She is buried in Derby Cathedral, where there is an elaborate monument to her life and achievements.

Bess was an unusual figure, being so successful in a man’s world which had intensely patriarchal values.

In our story, when the company arrives at NonSuch palace, they are shown into a newly-prepared room, one in which a deadly search for the truths of the age will be played out on many levels: intellectual, emotional, religious and magical. Outside of the Queen’s own mind, no-one else in the room is aware of what is to follow, not even Bess…

Each  side of the board has its own symbolism and its own champion. In our five-act magical drama, Bess has a very special relationship with the Queen, one in which her grasp of the ‘common touch’ can be used to royal advantage…

Other posts in this series cover:

Image: Composite of original artwork by the author plus a portrait of Bess of Hardwick, courtesy of  Wikipedia, CC by 3.0, Public Domain.

6 Comments on “A Woman of Power and Substance”