From Stuart. The plot thickens… 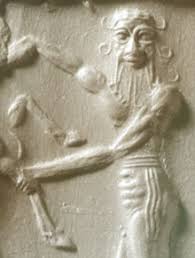 ‘In Mesopotamian mythology a Mother Goddess, with the assistance of a God of Wisdom created men out of clay, mixed with the blood of a slain God.

The Primeval male and female human beings were not allotted a life-span.

People originally only died as the result of natural disasters such as plague, famine or flood, or by internecine strife.

The Epic of Gilgamesh culminated with the introduction of a limited life-span for Mankind.

Man’s original purpose in being was to relieve the Gods and Goddesses of hard labour.

Gods and Goddesses associated with birth and fertility were also patrons of mining, smelting, and metal work.’

“We find the information contained on this board to be ever so slightly uncomfortable.”

“’The blood of the slain God’ is perhaps most perplexing.”

“It might be more than that if the Gods were Planetary Beings.”

← Heart to heart
A walk with dogs, the Lune and St Michael →