An Orcadian Diary (2) Before History

Continued from Part One

And now we should go back to an older time – a much older time – to flesh out the story of the islands of Orkney, north-east of the Scottish mainland.

The man in the picture is Gordon Childe. It’s 1927. He’s the newly-appointed Abercrombie Professor of Prehistoric Archeology at the University of Edinburgh. The photo shows him emerging from the first formal excavation of an ancient settlement named Scara Brae.

He’s an Australian and a Marxist, though his knowledge and insight have gained him an international reputation for other types of revolution. The depth of his understanding of ancient peoples is the reason he has been appointed to oversee the work at Scara Brae by the conservative Edinburgh establishment. He’s not frightened of proposing things that upset his fellows in the field… and he’s about to propose something truly shocking about Scara Brae…

Scara Brae lies on the West Mainland of Orkney (see map, below – location ‘B’) – a place that hosts one of the densest concentrations of ancient sites in the world. The remains of the ancient village are on the very edge of the sea in Skaill Bay. Here, the enemy is climate: high winds and storms batter this beautiful archipelago, passing quickly, but capable of doing great damage. There are (almost) no trees on Orkney; a result of the constant winds.

The location of the Orkney islands, off the North-East coast of Scotland

In 1850 a great storm blew away some of the sand and earth covering what is now the Skara Brae site, exposing several intact dwellings of what were, then, considered to be Pictish remains dating from the latter half of the first millennium AD.

William Watt, was the owner and occupant of Skaill House – still considered the best example of a manor house on the islands, and which is now a museum.

Part of the site, with Skaill House in the distance.

Watt carried out an investigation of what had been revealed. This was before there were any legal requirements for how such treasures should be excavated. He explored the two dwelling that had been revealed by the storm and removed many objects from the site. Unfortunately, he left little documentation of his work. In 1861, James Farrer, who was an archeologist and had discovered the burial chamber at nearby Meashowe, (see later post in this series) undertook his own investigations. Sadly, he, too, left little in the way of records.

When Professor Childe was appointed, the site had been exposed to the elements for seventy years. But, by then, the Scottish authorities had created a formal programme (which became Historic Scotland) to document and protect their ancient treasures. It was into this resurgent movement that Gordon Childe was appointed. He made an immediate impact, proposing that the coastal village of Scara Brae should not be dated to Pictish times (around 700 AD), but rather to the Neolithic period, around four to five thousand years old.

Scientific dating methods have proved him right, but there was controversy and even outrage in the mainstream press at the time. Some of this would have been due to him being Australian (the ‘what does he know’ type of comment) and also his well-known Marxist views on society. Nevertheless, Childe stuck to his conclusions, though he did his best to share the logic of his deductions. He became a popular figure–helping to promote archeology as a science having far greater implications that had previously been thought. It is ironic that, in the photographs at least, he resembles an early ‘Indiana Jones’ figure. The subsequent importance of Scara Brae is recognised in its being named a UNESCO World Heritage site – one of only a handful of such places. 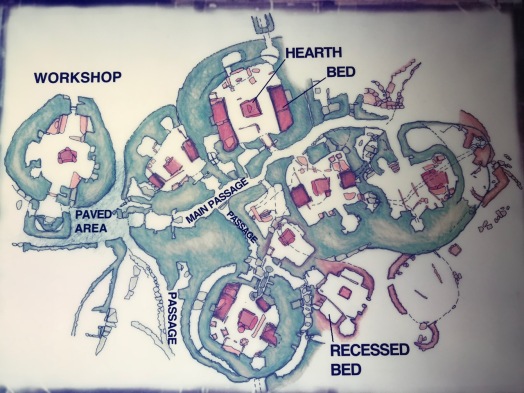 Scara Brae comprises ten houses set into the earth, near Sandwick; clustered together and linked by passages. The site is located next to the sea. The seafront has been reinforced to prevent further erosion. It is thought that there may originally have been hundreds of such dwellings in this location – all connected by an intricate system of shared living. It offers a glimpse into the lives of our shared ancestors from a time before Stonehenge was built…

Orkney offered the perfect home for the early agricultural settlers who came to farm here. Despite being on a line with Stavanger in Norway, Orkney has a relatively mild climate. People we met – all very friendly – said that, if there is bad weather, it blows over quickly. The islands also benefit from the Gulf Stream, which brings warmer water to its abundant shores.

Wind is the enemy, and is the reason there have been few trees here in recorded history. But that brings its blessings, too: the land was always fertile, and forests did not have to be cleared to create a farming landscape. The original Orkney peoples became expert in using stone for building, rather than wood. They also used it for furniture… We benefit from that in that, at least at Scara Brae, we can see the the more or less complete dwelling, and – uniquely – can see the actual furniture used by these families, five thousand years ago… This is what makes Scara Brae unique; we can form a real picture of how they lived and what they treasured. 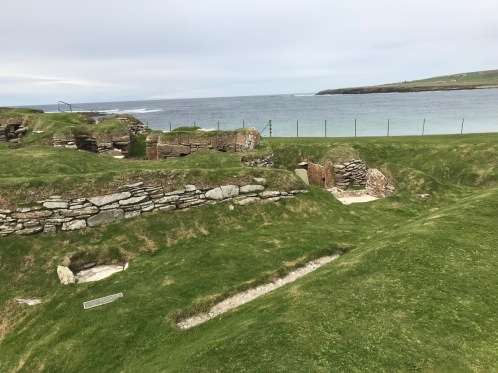 Everywhere you look on Orkney, you see the sea. We who have roads everywhere forget the importance of sea and rivers to earlier civilisations. The Orkney archipelago is a sheltered network of natural waterways and it is safe to assume that the original peoples were expert sailors, as well as farmers.

The visitor centre is excellent, and provides a complete reproduction of the most complete dwelling so that you can be prepared for what is later seen from the walkways. 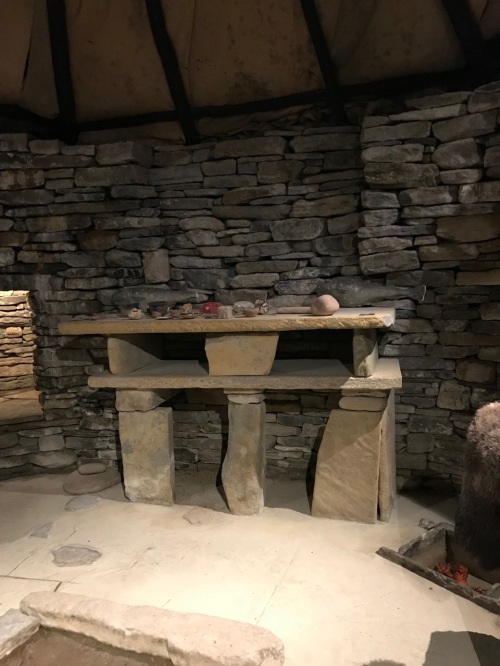 Apart from one building, which is considered to be a workshop, all the family dwellings are remarkable uniform. They are partially sunk into the ground to give shelter and warmth. The walls between the houses are filled with ‘midden’ a mixture of shells and organic refuse which provides insulation.

Each house has a central hearth (see picture above), partly-recessed bed chambers, and, astonishingly, a toilet chamber – connected to a central flushing system! All the houses include a ‘sideboard’: a piece of furniture on which the families’ prize possessions, and possible tools, would be displayed. This shows a strong cultural ‘norm’, something that bound the villagers together into a shared and protective identity. These were peaceful and creative people. It’s no exaggeration to say that you can still ‘feel’ their presence in this beautiful place, which has been so lovingly protected and exhibited for all to see.

The visitor centre reproductions of ancient life are exact

Each house had beds, located in separate chambers, though open to the central fire in the hearth.

The roofs were constructed using a mixture of wood, cloth and skins. This reproduction shows how they are thought to have looked.

Everything is now seen in context. The hearth, the bedchambers and the stone sideboards are see with clarity and you get that amazing inner feeling that you are actually sharing the homes of ancestors from an astonishing five thousand years ago. 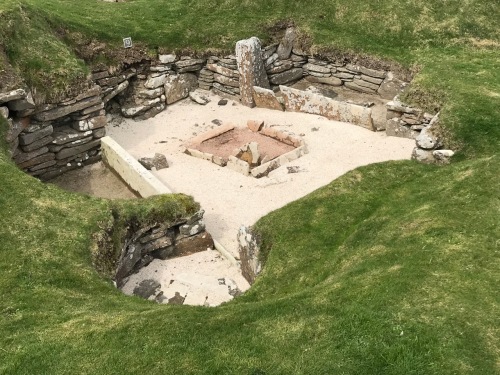 Orkney is a very beautiful place. Its beauty is not just in the landscape, but in its living history. There is no better example of this than Scara Brae. Much of that is down to Gordon Childe and the adventurous and open mind he brought to the task of revealing its true past…

One of very few trees we encountered on our trip

By the time Stonehenge was built, the Scara Brae site had been abandoned. No-one knows why. That his wonderful piece of ancient history survived so intact is a miracle. But, Orkney has that special feeling about it; and the idea of miracles fits well, here.

15 Comments on “An Orcadian Diary (2) Before History” 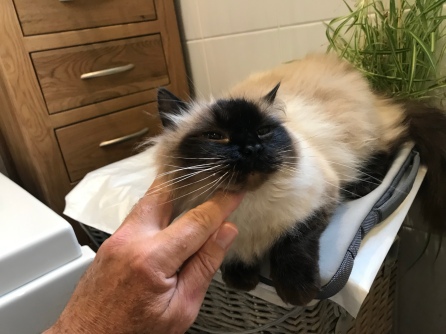 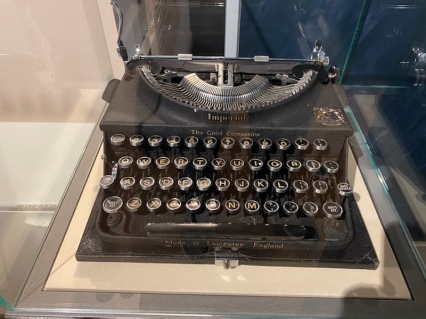 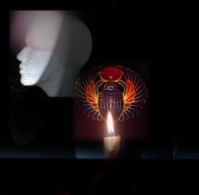